Welcome to our talented author, Alexandrea Weis.  I am so pleased to introduce her to all of you. 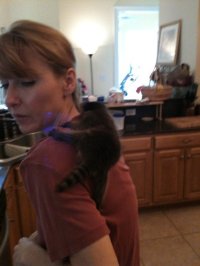 Alexandrea Weis is a registered nurse from New Orleans who has been published in several nursing journals and textbooks. She has been writing novels and screenplays for over twenty years. Her first novel, To My Senses, was a finalist for commercial fiction in Eric Hofer Book Awards, a finalist for romance in the Foreword Magazine book of the Year awards, and a finalist for romance in the USA Book Awards. Her second novel, Recovery, won the Gold Medal for best romantic suspense from The Reader’s Favorite Book Awards and was named best Romantic Suspense by the NABE Pinnacle Book Awards in 2011. Her third book, Sacrifice, closes out the Nicci Beauvoir Series. Her fourth book, highlighting her love of rehabbing wildlife, called Broken Wings, is now out in paperback and ebook.

Ms. Weis is also a permitted wildlife rehabber with the Louisiana Wildlife and Fisheries and when she is not writing, Ms. Weis is rescuing orphaned and injured wildlife. She lives outside of New Orleans with her husband and a menagerie of pets.

My father had an independent production company in the French Quarter of New Orleans. Being raised in the motion picture business, I learned how to run sound, do basic cinematography, film editing, and to be an all-around gopher on
the set. Sometimes, I even did some in front of the camera work as a bit player and background extra. Because of his work in movies, many creative people in the French Quarter gravitated toward my father’s Creole cottage on Dumaine Street. I grew up associating with Jazz musicians, actors, writers, and talented artists. But probably the person who influenced me most during that time was my father’s good friend, Tennessee Williams. He was a kind and patient man who would sit with me for hours discussing the intricacies of his writing. From him, I learned about character development and the value of good dialogue. He taught me how to build personalities into characters that would resonate with readers. He showed me the importance of searching for the right words to best reflect the idiosyncrisies of each and every character. Funny, how you can forget so much from so many, but I remember every bit of advice Tennessee Williams taught me.

Looking back, I can see the synchronicity of circumstance having set my course in this creative direction from a very early age. If I had not been born in the city of New Orleans to a motion picture making father, or raised amid the bohemian people of that uniquely eccentric society, I might not have evolved into the writer I am today. However, I did not always embrace my creative side, and for years pursued a career based in medicine and practical knowledge. But like pressurized lava simmering beneath the surface of some volcano, the innate creativity I was born with eventually came erupting to the surface. I finally let go of my apprehensions about turning away from my medical training and started to embrace my stifled urges. It was then I re-discovered my writing.

I came to realize that happiness is not found in living some monetary-based lifestyle, but in following a path that yields to the yearnings of your heart. We are all born to do something fortuitous on this planet; we just have to stop trying to wonder what that is, and just do what makes us happy. After all, happiness is always the outcome when you finally learn to follow your dreams.