I see Destiny walking into the room with a huge grin on her face. I wonder what she is grinning

about. Undoubtedly, she’s here to interview me.

Destiny Phoenix: Tell me a little about yourself.

David R Bennett: Well, I am an author hailing from Spring, Texas just north of Houston. I was

raised here and here I still remain. Also, I am a husband and father of 1. I love the paranormal

works of fiction as well as sci-fi, fantasy, and mysteries. Well, mysteries are a part of most

novels written, in my opinion.

DP: David R Bennett is that pen name or your real name?

DRB: It is pen name that came about from the rearranging of my real initials. I’ve always liked

DP: How long have you been writing?

DRB: Probably my whole life in one fashion or another. I have always woven a tale or even

DP: What’s the hardest you find when creating your story?

DRB: Probably creating the background for the characters involved, if the first novel in a series.

Otherwise, the not knowing what’s going to happen to my characters.

DP: I assume that when you start you have some idea of what’s going on?

DRB: Rarely, unless I create a bunch of title names and create small blurbs for them. I did do

this for the Destiny Phoenix series. So I have a hint of what’s going to happen in the series.

Exactly how that all comes about is another thing entirely.

DP: Interesting. What method, if any, do you use to curb writer’s block?

DRB: I’ve talked with other authors about this same thing. And, like myself, quite a few feel that

having various projects running at the same time helps to prevent writer’s block. I have a highly

active imagination. Sometimes it’s hard to curb, so I always have more than one project going on

DP: What’s next on your plate?

DRB: Always love to share this part. Always promoting my latest work with those I know. Right

now, I am in the beginning of Alien in the Midst (a sci-fi story about an alien crash landing on

Earth), preparing to tackle Destiny Phoenix and the Cry of the Wolf, and starting Mind Games

about children who gain superpowers after being left for dead in car crash.

DP: Wow. That’s a lot on your plate. How long do you think that the Destiny Phoenix series is

DRB: At least twelve books from what I can figure. Possibly, most likely, more. As for my

others, who knows. Life is difficult and so is everything my characters will go through.

DP: Where does your inspiration come from?

DRB: My inspiration comes from multiple sources. I watch movies, TV, and read books. So

from all of that. And sometimes just right out of thin air on some things.

DP: What genre does your work fall under?

DRB: Trying for YA paranormal fiction. But, really, I try to make the books where everybody

will enjoy it. That was the mission of JK Rowling and I like it.

DP: What genres do you read?

DRB: I probably have something from most genres out there from YA to horror to mystery-

crime to action/adventure to fantasy to space operas to paranormal to sci-fi to romance. Mostly I

DP: Who is your favorite author?

DRB: There are several that have inspired me over the years Margaret Weiss and Tracy

Rowling, and even a few contemporaries of mine such as Ann Snizek, Michael Knight, and

DP: What advice, tips, do you have for others getting into the business of writing?

DRB: Write what you want to read, not because it’s the in thing. And use the social media as you

until your story ends. That is the main thing before publishing your work. 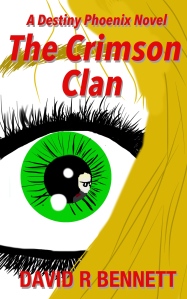 Excerpt of The Crimson Clan

“I hope it won’t take too long to find, Sandra,” Destiny says.

“That depends on the power of Sandy’s cell, Des.” Chris mutters. “Try calling her.”

I do as my hunky boyfriend suggests. I dial Sandra’s phone on my brother’s cell.

“Hello?” I hear from the other side of the phone with some panting in between the words.

Quickly, she seems to stop. “Destiny?”

“Yeah, Sandra,” I say. I can hear her gasping for breath. “Where are you?”

“What the hell is going on?” She screams into the phone frantically.

“Can you kinda hurry,” Sandra asks me. “I’ve got these weird pasty freaks on my tail. For

“Pasty freaks?” I say aloud. That’s when I hear Brandon mutter some curse word and floor

“Near the Dillard’s entrance by Four Oaks Drive.”

“Okay, Sandra. Stay calm. We’ll be there in five. Meet us at the west entrance of Dillard’s.”

“All right. Hurry.” I hear the panic in Sandra’s voice.

“Stay calm and peruse the store not to give any suspicions to the workers.”

“Certainly.” I say hanging up the phone.

“Destiny, what’s going on?” Chris asks me as I can see the worry in his face. “Are the same

ones after Sandy that invaded my home?”

“The exact same creatures. They want us. You, me, Brandon, and Sandra. They don’t know

about Little Michelle here. Let’s keep it that way.”

“We’re the chosen slayers to bring balance back to this world,” Brandon states. “I was sent to

a boarding school for my protection when I was nine just after the birth of Destiny.”

“That sucks, bro.” Chris says as we reach the Mall.

It did not take us long to figure out where Sandra was. People were rushing out the doors of

Dillard’s in fear. Obviously, these pasty creatures were in the store and have yet to find Sandra.

However, we spot Sandra easily. She managed to mix in with the crowd that rushed out of

the store. We screech to a halt. Brandon pops open the back door for Sandra to jump in.

“Sandy, get in,” Brandon says to his sister.

“Forget it. We can come back for it.”

The dark haired brown-eyed best friend of mine, who stands at five-foot- four, an inch

shorter than me, hurriedly, gets into the Tahoe. Sandra, quickly, jumps in and shuts the door.

“Chris, Miki, what’s going on?” She says trying to catch her breath.

after helping Sandra out.

“Hang on!” Brandon screams as one of the wraiths jumps out in front of our car. We run over

it leaving a partially body badly squished all over the road.

“I’ve only heard if these guys before,” Brandon tells us. “I don’t know how to defeat them.”

He, then, gets slapped on the shoulder as their little sister sits zoned out holding her legs.

Michelle is totally out of it. This is out of her level of comprehension. Or so I thought.

“Don’t worry, I know to defeat these wraiths.” I calmly, and confidently, say. Where did that 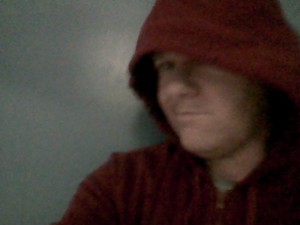 David R Bennett is an author from Spring, Texas in the

United States of America. He lives with his wife, Brandy, and

initials real initials. He, also, thinks the name has a ring to it.

Not only is he an author, he also is an illustrator. His real

name is what is credited with the cover art to his novels.

He attended Rocky Mountain College if Art + Design in Denver, Colorado where he

he learned in college he uses to design his covers.

He, also, reads a lot of sci-fi / fantasy / paranormal books. Some of his favorite monsters

are vampires, mummies, zombies, goblins, ghouls, werewolves, etc. He has plans to write a long

Alien Survivor series. Both of these series are planned as Young Adult novels.

warfare could one day result in human extinction by undead creatures. And his favorite series of

films is Star Wars and is excited about the next film coming out in 2015.